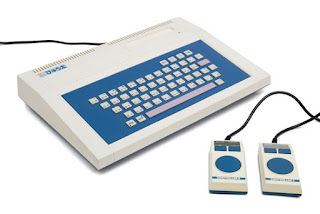 Most of you will know the TOMY PYUUTA or TUTOR console. Released in 1982, it had a 16bit CPU and was way above the standards at it's time. 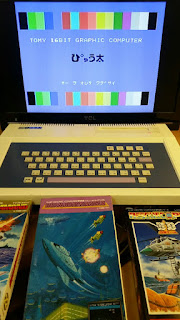 2015 and 2016 we were at a hunt to get the remaining undumped cartridges for this system. Most japanese cart's were undumped at that time and after a hugh amount of invested money, we could aquire all missing games for dumping.

the big problem was, that the cartridges and the console itself are very RARE and you have to pay high prices for some games. Cartridges get sold for 50EUR to 150EUR each. You mostly don't have the time to think about it twice and directly have to buy the rare cartridges if you see some of it popping up in various auctions-plattforms...

At the end, we got all officially released cartridges dumped! Currently only 2 DEMO cartridges (US and JP) are undumped.

Emulation in MAME was nearly completed and only had to get some small modifications, so that the 32kb games could be played! 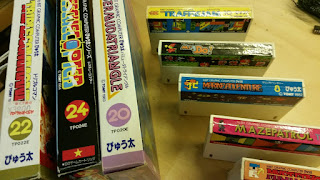 The Tutor/Pyuuta got about 30 unique game-releases. There are three 3D games (with 32kb), 5 games with 16kb and all others only using 8kb.

After we had a complete dumped collection of all the games, i was thinking about a Flashcart...
I contacted Brizzo, and about 2 weeks later he had designed a Flashcart.


Revision 1 of the cartridge has 512kb space and you can play all available 8kb games with it. You can select the games by dipswitch.

I made a One-Wire-Modification to the flashcart and now you can play all available 8kb and 16kb games with it.


The nice thing is, that this flashcart costs maybe half the price of the cheapest Tutor/Pyuuta cartridge and you can play nearly 90% of all available games with it. All you need is the cartridge and the DIP-Switch-List (see below) and you can enjoy 28 games on your console!


To get the remaining three 3D games working will be more tricky, as the Tutor/Pyuuta console needs a special GAME ADAPTOR to play these. The consoles don't have enough addresslines for 32kb cartridges, so my next goal is a special flashcart which has this GAME ADAPTOR (which is rare as hell too) included and fits directly into the I/O Port of the console.

this just show's what's the main three goals about dumping the games!

Preservation: available cartridges are becoming less and less. So a digital copy of the content is a must have!
Emulation: people all around the world can enjoy or view the games/programs, even without having the original device!
Flashcarts: What would you do with an hardware-device, when you don't get games for it anymore, or when the available games are damn expensive. So flashcarts keep the original hardware useful!
Posted by TeamEurope at 10:40:00 AM No comments: