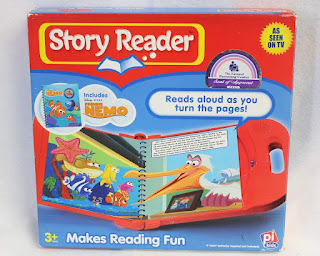 A pretty interesting system for small kids is the STORY READER or GESCHICHTEN ERZÄHLER (how it's called in germany).
This system uses paper-books and cartridges (which contain the audio). Each page has small metal rectangles between the papers, so the console knows which page is currently opened.

The cartridges have only a 10-pin-connector which Sean Riddle reversed really quickly and got 23 english cartridges dumped.
The main problem was that it uses serial rom's (under one or two globs) for each cart. Which are not that easy to dump with normal programmers.
So i contacted Porchio if he could make an Arduino-based-dumper for this system and only a few days later i got his finished work sent.

The now available dumper is working perfectly with an Arduino UNO and only needs 6 wires. Which means it's pretty cheap and easy to built. 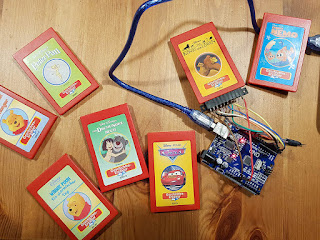 Seven german carts for this system are now also dumped and i will try to get my fingers on the other 8 german carts.

Thanks to Sean and Porchio for this amazing work!

Hopefully someone will take a look at this stuff, as i'm pretty sure, if the "audio" is emulated in MAME it will be an easy hook up with the scanned pages and that way MAME could put your kids to bed.
Posted by TeamEurope at 9:25:00 PM