2021 and 2022 were good years for the Casio PV-1000 so far. Nine new hombrew games got released and this is a huge update to the existing small game-library of only 13 games, which this console ever had.

I had already designed a HOMEBREW-cartridge for this system some years ago, but as no hombrew-stuff was ever released (which also worked on the real hardware), i did not post about it.

But with the 9 new games, this was a good point to finish this cartridge and design a 3d-printed case for it. 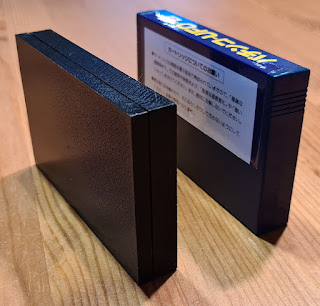 Youtube-Videos of all nine games:

The flashrom (39sf040) is removable and with most likely every programmer reprogramable, so if more homebrew-stuff get's released it's easy to add those to this cartridge.

I will most likely only built a maximum of 20 pieces of this cartridge, so if someone is interested, just write.