Birdie Try is another game, which is supported in MAME since years. Bryan McPhail added it in Version 0.36b2 and Angelo Salese simulated the MCU in december 2002, making the game playable.
The real MCU was not decapped so far, so Ivan and I teamed up and bought a complete board of the game.

I received it today!


Using the "typically" way to decap the 8751H, it took about 3 minutes to remove the cover, another 3 minutes to put some nail-polish on the eprom-area and about 30Minutes under the UV-eraser.


Afterwards i got this:

I wrote the dumped data to a new 89C51 and tried it with the real PCB and IT WORKS PERFECTLY!.
Afterwards i clued the original 8751H together and now it looks like it was never ever opened or touched. 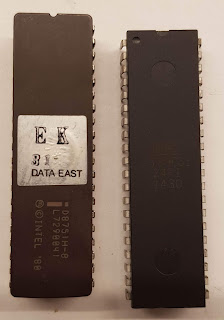 If you want to donate so we can aquire more MCU's for decapping, just paypal to crazy2001@cooltoad.com