Making a RAM cartridge for the SVC was not an easy task for me, as i never had done flashcarts with ram's before.

While this was my first version, it had the big problem that the battery was empty after just one day, loosing all saved highscores.

The second version was to split the the three RAM-games on two cartridges. One S-RAM cartridge and one F-RAM cartridge. Basically the designs looked to work, but had some problems. The F-RAM-cartridge needed a diode (i used a LED) to get the needed 3v for the f-ram chip. While i thought it looks kinda cool at the beginning, it wasn't that cool after longer useage of the cartridge. The S-RAM cartridge had the problem, while you could play Dragons Slayer, it did not save your game...because of the missing battery... 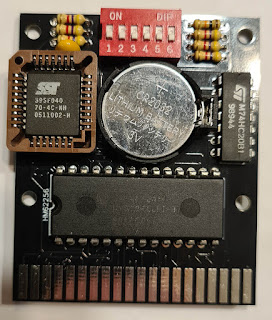 This is now my third RAM-Cart for SCV and most likely this will be my last/final one. This cartridge uses now S-RAM again and can play and save all three available RAM-games for the console. It uses a CR2032 battery for the S-RAM chip. I tested the prototype now over 6 months, and the S-RAM still keeps the saved data, so i'm pretty sure this is now working correctly and should at least work for several years with one battery.

It also has four 8kb ram-banks, which means you can have four different save-states if you want.

The cartridge also has now a front- and back-cover. 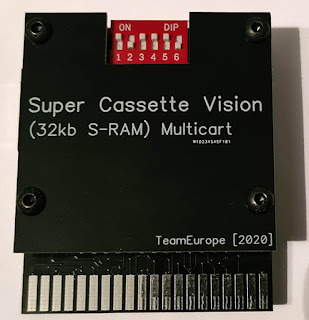 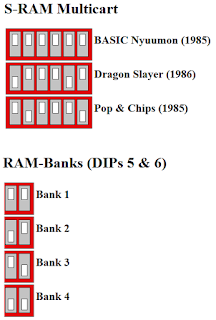 Below are the three currently available Super Cassette Vision Multicarts: