The two already available Multicarts for the SCV can play all games, which do no need any additional RAM inside the cartridges.
Pop'n Chips in reality also needs extra RAM for saving the TOP-10 Highscore. On the available 27in1 cartridge you can play the game, but you get some garbage at the titlescreen and can't save the highscore.

Today i just finished the prototype cartridge for an 32kb+RAM Multicart! Which means, all three 32KB games (which need the extra RAM) are also now fully playable. 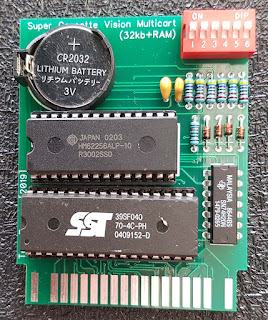 That bring's Super Basic, Dragon Slayer and Pop'n Chips to a fully working state! And best of all, each game has it's own RAM-Space.

The final cartridges will be ready in mid-august. I will update this post also with the final DIP-Switch sheet.