Brian bought the board and sent me the MCU for decapping.
The protection of this game was reversed already a couple of years ago, but emulating the real thing is always better.

I got the MCU today via post-mail and as i had some free time today, i took a look at it.
At first i always try a test-dump from the MCU (maybe we are lucky and it was never locked). => Of course it was locked, just giving me FF's. ;-) 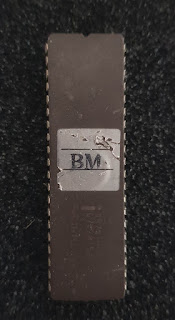 As with all 8751H's i heated the top of the chip, and removed it with a screw driver. 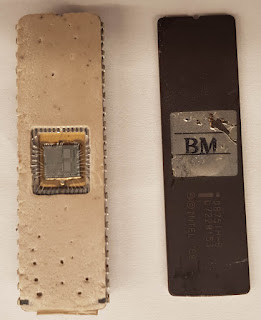 After that you just cover the eprom-area with some uv-resistent material (nail polish) and put the chip under the UV-Eraser, which will then delete the uncovered Lock-Bit.

Afterwards you can read the MCU with your favorite programmer, just like it was never locked.

The 4kb rom is nearly empty, just having some short binary snippets, but i already got confirmed that this dump looks good:

This MCU was used in a couple of 1943 variants and should now get them all fully preserved!
Most likely this will be included in the next MAME release.
Posted by TeamEurope at 6:01:00 PM