The PC-Logomax 2 is a "learning pc" for kids (Age 6+). YENO released this machine in 1992 in Germany, Austria and Swiss. Also three cartridges "LOGO-DENKSPORT", "LOGO-WORT" and "SAY IT IN ENGLISH" got released here. Thats the only know cartridges for this system.

The main-unit uses a TMS50C44N2S chip with internal ROM. This chip was also used in some dolls in the late 80's, which had speech synths. 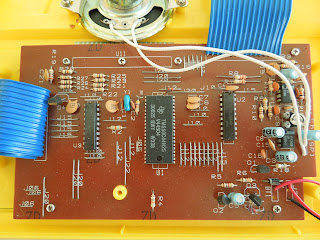 The cartridges just have a glob on top of it: 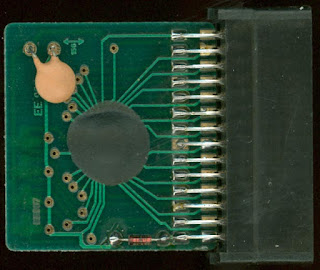 Luckily the pinout was pretty straight forward! But the most interesting part was on the backside of the cartridge-pcb: 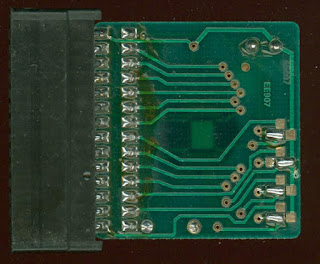 While i already knew, that VTECH at least did put 2 games on each cartridge, where they could select each game with solderable pins (like a DIP-Switch), this is now one big step better!

YENO made these cart-pcb's extremely flexible and the highest 4 addresslines could get modified in all possible ways on the PCB, by just soldering some bridges. That way you could select banks and even change banksizes on each pcb.

The biggest possible size of the rom-chip is 128kb. the selected banksizes on "LOGO-DENKSPORT" and "LOGO-WORT" are just 8kb. which would mean, that this cart can hold up to 16 games!

I changed all four pads the get the maximum output on the chip and dumped the full 128kb from it, from both carts. guess what, both dumps matched! Which means both cartridges have the completely same romchip inside.

Now i had to analyse the complete 128kb, as LOGO-DENKSPORT and LOGO-WORT only use 8kb each. What are the other 112kb inside the rom?

After stepping threw the 128kb ROM, i found another game for the PC-Logomax 2 inside. It was "SAY IT IN ENGLISH", but this game uses 16kb, which means you have to change the banksize too on the cartridge! Changed the solder-bridges on my LOGO-WORT cartridge and voila i had SAY IT IN ENGLISH running on my machine.

The other 96kb of ROM-DATA are another three games (32kb each), but it looks like these are not for the "PC-Logomax 2"! I believe they are for another YENO learning laptop...the PRIMUS EXPERT...as the cartridge-cases for this machine look nearly identical. This is not confirmed so far!

This means, if you have one cartridge for the PC-LOGOMAX 2, you basically already have all three available games in your hand and just need to change the solderbridges to get your game started on the console.

You also have three games for another console included, which is most likely the PRIMUS EXPERT.

It was a fun challenge to get all this documented and to get the cartridge-design reverse-engineered. This means 6 new cartridge-dumps for MAME and some documentation of the PC-LOGOMAX 2.

YENO made a good trick to just produce one cartridge and get it sold maybe even 3 times to each customer.

The TMS50C44N2S will most likely get shipped to caps0ff, maybe they can decap it, to get this machine fully preserved. I will try to get a PRIMUS EXPERT next to confirm some stuff.